Feijoa Season is upon us 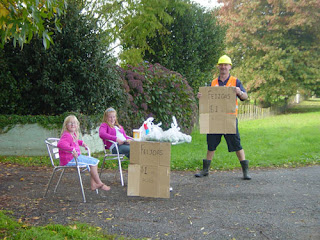 My absolutely favourite fruit of all time is finally in season. We hae an abundance of feijoa trees and if I eat another feijoa I will turn into one. The kids collected up the excess ones and decided to sell them at the gate. Business was a bit slow to start with so Tony thought he would get out there with his hi-viz vest and hat to help things along a bit. Think the passersby felt sorry for the kids saddled with the loony so everyone started stopping and buying the feijoas!! The kids made quite a tidy little sum so guess what they will be doing after school today!!

I haven't had a lot of spare time lately. Head down, bum up doing assignments but next one isn't due for 6 weeks so am having a breather this week. Tony and I went to Taupo this weekend for some R & R. We stayed in a motel right on the lake front which was just beautiful. Went for a walk along to the Taupo bungy....you know I did a sky dive at 10,000 feet but I wouldn't do a bungy! There is just something slightly insane about throwing yourself into mid-air with nothing but a bit of elastic supporting you. Spectacular setting for it though.

Kids decided they want another cat despite having lost 2 in under a year. We are going to have a look at some later this week. They are all rescued kittens and we will probably get a couple so they are company for one another. We had a look online last night...too hard to choose.